Anniversaries are celebratory occasions whether they're for weddings, birthdays, or organizational milestones. Well, a very special organization, Friends Needing Friends, is celebrating its 29th anniversary on June 28th. Friends Needing Friends is an organization that allows widows from many walks of life, of differing ages and economic stations, as well as different church preferences, to come together once a month to fellowship, enjoy a luncheon, gain insight from God's Word, give each other support and friendship and have fun while doing it. Is there a scriptural precedent for singling widows out from the rest of womanhood? I think so.

God knew that widows were in need of support and created a specific category for them, spoken of often in the scriptures. Sadly enough, the loss of a husband in ancient Israel was normally a social and economic tragedy. That is less true today, but isn't always the case. Since many widows were in an extremely vulnerable economic position, they were the prime targets of exploitation. God knew this and He said of Himself that He was not only the father to the orphan, but the legal defender of the widow (Psalm 68:6).  Widows were prominent in the New Testament. You don't think it was simply by chance that Anna, a widow who lived in the temple, was the first to greet our Messiah, Jesus Christ. And Jesus, himself, protested the exploitation of widows (Mark 12:40). In fact, the early church defined the essence of true religion as demonstrating compassion to the poor and needy, and mentions the orphans and widows in particular. Widows have the eye and heart of God Himself. 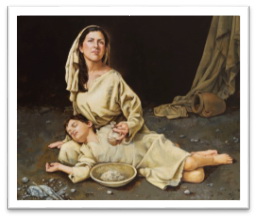 As I was reflecting on the widows mentioned in the Old Testament, my mind was drawn
immediately to a familiar one whom we know as the Widow of Zaraphath (I Kings 17: 1-16). You recall that there was a great famine in Israel, which extended across its borders. In the land of Zaraphath there was a widow with a young son whose food had run out and they were both on the brink of death. Zarapath was a Gentile, Baal-worshipping place. Yet, God, because of His great love and compassion for all people, sent the prophet Elijah to her. And he not only became the conduit God used to keep her alive,
he became her support group. He provided for her daily food and fellowship as well as becoming a male role model for her son during this crucial period in her life. While people were in dire straits and dying all around, God singled out this widow and met all of her needs. 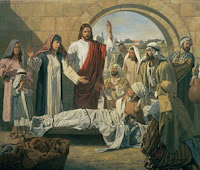 A New Testament widow who comes to my mind is the widow of Nain. We have no given name for her, but she is identified as a widow. (Luke 7:11-19) When Jesus came to the city gate of Nain, he saw the funeral procession and the immense grief of the mother over the death of her only son. No one called out to Jesus to raise him from the dead, but Jesus walked over to her and admonished her not to weep. Then he walked over to the bier and took the young boy's hand and told him to get up...and he did. Now, not only did Jesus raise a young boy to life, but also he literally changed the way of life for the widowed mother. Without a son, she had no rights to her husband's property and she could easily be reduced to a social outcast in the community. Having sons was as important as having a husband in those days- and especially important for a widow. Jesus' compassion for her was such that He gave her back, not only her son, but her dignity and standing in the community. He is concerned with every detail of our lives. 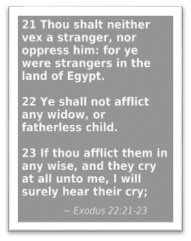 While laws regarding women's rights have radically changed since biblical days, the broken heart, the grieved spirit, the loneliness and total rearrangement of one's life is still a part of a widow's lot Being a widow changes the way everyone views her as well. The of quoted epigram of Alphonse Karr, "The more things change, the more they remain the same," is true for widowhood. Widows are still vulnerable to unscrupulous business proprietors, less-than-good-intentioned men, not to mention jealous and suspicious wives. They have to learn a new identity and are often excluded from social events because they are no longer a part of a "couple." Many times their monthly incomes are lessened with their husband's deaths and forced frugality becomes a way of life.

This is where Friends Needing Friends plays an important role in the life of a widow.  Besides providing opportunities for friendship and fellowship, it does so with other widows, those who are best qualified to understand and provide strength and support for the journey. In addition, experts in various fields are brought in to speak with the widows to help them be aware of scams and unscrupulous practices. While Jesus condemned the perpetrators of such heinous behavior in his day, the widow herself had little recourse as she had such few rights.  God is using Friends Needing Friends to be His hands extended to widows, assuring them that they have fellow travelers on their new journey and their shared experiences become bridges to achieving their full potential as daughters of the King.

It should become as no surprise to learn that a widow established Friends Needing Friends.  Dotti Ackerman was still experiencing the immense pain of loss when she started this organization two years after the death of her husband Allen Israel. There were ten women present for that first meeting, all of whom are now enjoying their eternal reward, face to face with their Lord. It is a joy for me to wish a Happy 29th Anniversary to Friends Needing Friends along with a "shout-out" to Dotti Israel Ackerman who had the courage to look beyond her own pain to help alleviate the pain of others in the same position. There are two chapters: South Jersey Chapter and Boynton Beach, Florida Chapter. They minister to widows in India, a group who are treated much like widows were in biblical times. God is using this ministry to alleviate much of their suffering and feeling of isolation and despair. It is fitting that Dotti chose the following verse as the theme for the organization:

Praise be to the God and Father of our Lord Jesus Christ, the Father of compassion and the God of all comfort, who comforts us in all our troubles, so that we can comfort those in any trouble with the comfort we ourselves receive from God. (II Corinthians 1:3-4)

God's compassion, care, and comfort are as true today as they were in ancient days. If you haven't given your life to Him, I strongly encourage making Him Lord of your life. Believe in the death and resurrection of Jesus Christ and His love for you, and experience the joy of being a daughter of God.

"Through It All" by Cece Winans & Andre Crouch

"For Such A Time As This" by Wayne Watson