Ruth is the third woman mentioned by Matthew in his genealogy of Jesus. Her story begins at a time in her life that was characterized by seemingly endless good-byes. Her story is told in the book of Ruth in the Old Testament. Because there was a famine in Bethlehem, Elimelekhad taken his wife Naomi and two sons to Moab where he could continue to make a living. Eventually, Elimelek died and about ten years later the two sons died leaving Naomi, her daughters-in-law, Ruth, and Orpah widows. All the men in the family were dead, and because property could only be owned by men, they were helpless as they had lost their means of support.

Feeling nothing but hopelessness, Naomi decided her best course of action would be to go back to Bethlehem, and, since her daughters-in-law were now legally members of her family, they would go too. This would mean for Ruth, the heart-wrenching good-byes to her native country, her biological family as well as going to an altogether new culture and country, all of this coming after burying her husband. Whatever emotions she may have been experiencing, Ruth obediently followed her mother-in-law out of town toward Bethlehem. At some point, before they were too far into the trip, it must have hit Naomi what this great move would mean for her daughters-in-law and she stopped, turned to them and said, “Go back to your mother’s home. May the Lord grant that you will find rest in the home of another husband.” While Orpah finally relented and returned to Moab, Ruth could not be persuaded to return to her family. She resolutely stated to Naomi, “Don’t urge me to leave you or to turn back from you. Where you 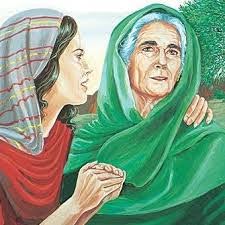 go, I will go, and where you stay, I will stay. Your people will be my people and your God my God. Where you die, I will die, and there I will be buried. May the Lord deal with me, be it ever so severely, if even death separates you and me.” (Ruth 1).

I don’t know if Ruth realized what would be required of her in making that bold, but love-inspired declaration. She was going into a way of life that was totally different from that into which she had been born. But one thing seems to be clear, she was totally willing to follow the God of Naomi. Perhaps she had already fallen in love with Jehovah God, most likely hearing about him from Naomi.

When they arrived in Bethlehem, they were penniless. Naomi was bitter, and though relieved to be back in her native city where she had friends, was familiar with the customs, and could freely worship her God, she wasn’t that pleasant to be around. Yet, not once do we read that Ruth was impatient or unkind to her. In fact, Scripture tells us that she was so submissive and loving that, even though she was a foreigner, she won the admiration of the townspeople and her reputation spread throughout the 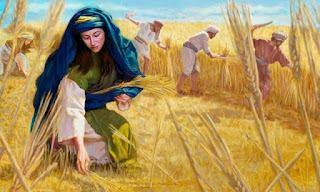 town. She took the initiative to go to the fields to glean for food for the two of them and worked tirelessly to put food on their table. She wisely listened to and followed the instructions of Naomi who helped her to navigate cultural practices unknown to Ruth. Ultimately her kind and humble spirit, coupled with her strong work ethic, won her the respect and love of a rich relative of her deceased husband named Boaz. They married and became the father of Obed, who became the grandfather of King David, a forefather in the lineage of Jesus. 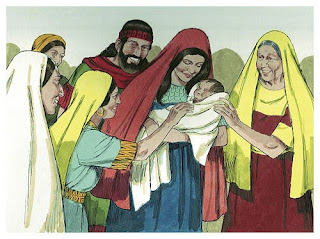 The story of Ruth reminds us that our lives are far more significant than we can ever imagine. Not for a moment would Ruth have imagined how her life would play out. Every detail of this courageous, loving woman’s life was orchestrated by the hand of God. Just as is yours and mine. Ruth had many outstanding characteristics, but perhaps the most notable one is her servant heart. She consistently ministered to the needs of her mother-in-law and daily got up before dawn to glean in the barley field for enough food for them to survive.

Like Ruth, you too can put on the work clothes of servanthood and love and become engaged in service to others, service to your children. (Yes, even grown children still need your love and attention and sometimes your babysitting services.) and service to your church. Dotti has remarked many times about the abilities and availabilities of so many of you, without which this ministry couldn’t survive. You will be joining the ranks of some truly inspiring women when you become engaged in the lives of others. Boaz praised Ruth openly. Let me leave you with these encouraging words:

God sees your work and He will reward you openly

And say, “Well done, you good and faithful servant.” 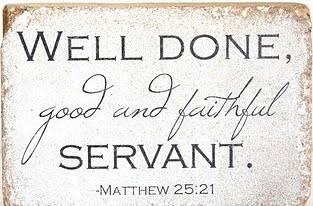 If you haven’t accepted God into your life but would like to do so, just sincerely follow the steps below.

Commit yourself to His righteousness by confessing Jesus as Lord and Savior. (Isa 53:5; Col 1:22)

Prayer: Father in Heaven, I'm sorry for the things I've done that are wrong. I am a sinner, forgive me. Thank You for loving me and sending your son, Jesus, to pay the penalty for my sin. Holy Spirit, come into my heart; Jesus, be my Lord and Savior. I give You my life.   Amen