You Were Called for Just This Time

Happy first full month of Spring with new life bursting out all around us! It is also the month in
which we celebrate the resurrection of our Lord and Savior, Christ Jesus. It’s truly a wonderful time of the year.
I am reminded of the story in the Old Testament that relays a time when the Jewish nation was targeted for death and destruction. Queen Esther, wife of the Persian king, a very powerful empire at that time in history, played a pivotal role in saving the nation, preserving it for God’s purposes. Esther’s cousin had learned of a plot to annihilate the Jews and he asked Esther to go plead the cause of her people to the King. This presented a big problem for Esther as the King hadn’t requested an audience with her in over a month. If an individual went into the presence of the king uninvited and he didn’t raise his scepter, death would result. There were no exceptions, so Esther knew the stakes. History tells us that her husband was a man with an uncontrolled temper, quick to get

fiercely angry. She was a powerless pawn in his hands, wearing beautiful clothes, eating the best of foods and living in a castle, but not much better off than a slave. And her cousin had asked her to plead for her people to this man. She wasn’t just making up an excuse when she expressed her concern about approaching the King to Mordecai, her cousin. When she seemed to vacillate, her cousin reminded her that perhaps this was the very reason she was the queen in the first place. After fasting and prayer, she went into the King’s court, he raised his scepter, giving her an audience and ultimately the Jews were saved. (The entire story is in the book of Esther. It’s an exciting read.)
You have experienced moments in your life that have left you feeling much like Esther did upon receiving this news. She certainly wasn’t eager to go to the King uninvited, yet she was heartsick at the news she had just received and recognized that it was not information she could just tuck away in her memory bank and hope for the best. The death of your spouse was such a moment. Your life was forever changed. We call these moments “defining moments” in our lives where we are irrevocably changed. Did you know that God’s plan for your life didn’t change when your husband died, and you were forced to accept “widow” as a title? Your whole life had been a preparation for that moment, just as Esther’s life as an orphan living as a minority in a foreign country had prepared her for the difficult times she would face as a queen. You, too, might feel inadequate, unworthy, or even incapable of making a difference, thinking of yourself as “just a widow.” But let me remind you that you and your life are important to God. He has uniquely prepared you to do what only you can do to bring honor to His name. The places that we find ourselves in this life are not about us, but rather about Him and the bigger plans He has for our lives. Not bigger in the sense of 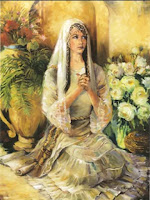 importance as the world sees things, but important to God. Did you notice the first thing that Esther did after making her decision to go to the King? She asked others to fast and pray for her and she did the same. Seeking God and his guidance and protection in our lives is valuable whether we’re facing a life-or-death situation or not. Keep your eyes fixed on the Lord and He will not fail you nor leave you to struggle on your own.
Now that you are walking life solo, you have the ability to do things you might not have been able to before. Think of the talents and abilities you have, perhaps the extra time you have, the neighborhood in which you live, your family members, especially those precious grandchildren, and ask God to direct your life as to how you can best impact those in your sphere for His kingdom. That’s what God is so good at, turning those painful times and situations in our lives around for a greater purpose than we ever thought possible.
I think of you ladies who are attending a Friends Needing Friends chapter, whether in New Jersey or Florida. Through your attendance you are able to offer camaraderie and support to other widows. In addition, you bring your creativity and talents through various means to the meetings. Some help out with the technology and others with photography. Just your presence speaks of your willingness to get past your own needs and be with other women, who like you, have turned a defining moment in your lives into a blessing to others. God is as interested in you as He was with those Jews thousands of years ago. He hasn’t left you to muddle through widowhood alone and promises to be with you every moment. God promised never to leave you or forsake you. (Hebrews 13:5)