The story of Lot’s wife is a sad one. Yet, it could easily become your story or my story too. That’s one reason it’s good for us to remember her and learn from her.

We know from Scripture that Sodom was an extremely wicked, God-reviling city. Yet, because it was a prosperous city and offered the best of amenities of the day, it appealed to Lot and his wife. They started 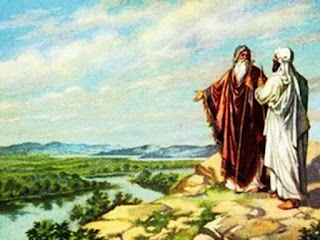 out as a young couple as nomadic herdsmen living in a tent. But, when given the opportunity by Lot’s Uncle Abraham to choose an area in which to settle down, they chose the prosperous Jordan district. Before long they traded in the tent for a magnificent stone home in the heart of the city of Sodom. They began to live the lifestyle they had only been able to dream about previously. It would appear that money and social position became Mrs. Lot’s gods.

The story of what eventually happened to Lot, his wife and their daughters is recorded in Genesis 19:12-26 in your Bibles. To sum it up, two angels came to Lot’s house one evening and told him to get his family together and get ready to leave everything as God was going to destroy the 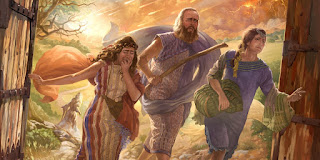 city. Early the next morning, they pushed Lot to hurry and get going to avoid the destruction that was coming. But he, his wife and two daughters were dragging their feet, seemingly not wanting to leave their lovely homes and their chosen city. The Scripture says, “The men grabbed Lot’s arm and the arms of his wife and daughters – God was so merciful to them – and dragged them to safety outside of the city.” Once outside the city the angels told them to run for their lives and “Don’t look back.” (vs. 16, 17a)

Lot, his wife and their daughters were barely outside of the city when judgment broke loose. Sulphur and fire rained down from heaven on Sodom and Gomorrah. The entire region was wiped from the face of the earth by the hand of God. No human being, no animal, not a blade of grass or small shrub remained alive. Yet, Lot’s wife proved that she hadn’t taken 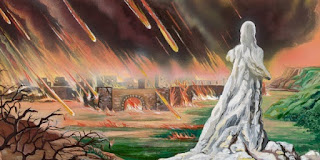 God’s instructions very seriously. She looked back. Her feet had left Sodom, but her heart was still there. And instantly she turned into a pillar of salt. In Luke 17:32 Jesus told us to remember Lot’s wife. So, let’s do just that and see what lessons she might have for us.

Merely to look back, to remember is not a bad thing. It becomes bad when we become chained to our past, no matter what characterized it. Obviously, if we can’t let go of memories of past mistakes and are chained to our past by unhealthy memories, it is destructive. But is it possible to cling in an unhealthy way to even the good things that are forever gone?  Memories are a treasure and one of the best legacies that exist after a death. But, there must be a balance between remembering and clinging to the memories. There is a life and death difference between holding a memory in gratitude and remaining chained to it. When you clutch it, demanding from it still, you even run the risk of moving into unreality and neuroticism.  A very wise widow wrote, “To live in memory, however tempting, is not to live at all.” When you refuse to move forward, giving your first attention to the present, then you solidify yourselves as surely as Lot’s wife was turned into a stationary pillar of salt. 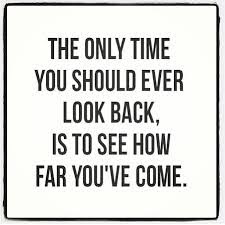 As we age, sometimes we cling to memories of our youth and feel that our best years are behind us. God was certainly good when you were in the bloom of youth and good health, but has He changed?  Whatever stage of life you’re in, whatever state your body and mind are in, God knows and His love for you hasn’t diminished in the least. I strongly encourage you to not dwell on those places in the past, gone forever. For many women, their best and most productive years are their “senior years.”

Remember how the angels had to literally guide Lot’s wife and her family out of destruction? How many times has God taken you by the hand and tried to lead you toward the safety of a grace-filled life, one designed just for you. Yet, because you couldn’t quite trust Him, you chose to look back and found yourself engulfed in the death of self-pity and longing for the impossible, a life that can’t be regained.

As we approach 2021, I encourage you to live fully in the present, with a glance backwards to check progress and give thanks for past blessings, with your eyes focused on the future. 2021 is a new year, a new page in the book of your life. Embrace it fully, knowing that your life is in God’s hands and His loving care is with you each moment. Healing and wholeness will be yours through Christ who loves you and gave Himself for you.

"How Great is our God"  by Chris Tomlin