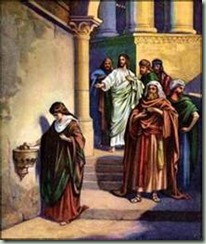 While Jesus was teaching in the temple, people were coming and going. He went over by the box where offerings were put. He picked this place to teach because He knew on that day, a very precious lady would come in with her last two pieces of money.  She had two mites. These were worth hardly anything but it was all she had. She did not know that Jesus knew about her.  Because she had so much love for God and trust in Him, she was going to give her last two mites and go hungry. She was so thankful for the comfort God had given her since her husband died. She had to give something. Waiting in the shadows, embarrassed that her offering was so small, she hoped for a chance to put her little coin in the offering box.  She planned to wait till the rich people were done pouring in their big offerings. Quietly, shyly, she watched for her chance. Jesus turned His head so she thought He was not looking. Quietly the KING OF THE UNIVERSE let His shy little widow woman think no one saw her give to HIM. Inside His heart, Jesus was thrilled at her attitude of gratitude even when she was so poor. He could hardly keep quiet.

He pretended not to notice her, but this KING OF THE UNIVERSE was adoring HIS daughter the widow lady, as he was teaching. Out of the corner of His eye He watches her silently work her way over to the box, looking this way and that. Hoping no one would see her give just two mites.

As she places her coins in the box, something happens in the heart of Jesus. What He did next had the effect of a huge pile of money hitting the floor. You know how everyone looks if you drop 50 to 100 big coins on the floor? It was just like that. Everyone was looking. Jesus, the KING of the universe, told everyone to look. She was caught! There was no hiding now.

At first she was so embarrassed. Then, as she heard the blessing from the Master's lips, tears flooded her eyes. There must be some mistake. She did not give more than the rich people, yet He said she had. Jesus began to explain that the rich people gave so much money but they still had lots of money left to get everything they needed. They had not given the same way she had. He told the crowd it did not take any faith for them to give so much because they were living in comfortable homes, full of food, and had more money coming.

Her gift was different. Her husband was dead. She had no more money and no more coming. She had given the money she really needed to buy food with. She was going to be hungry. She had to trust that God would take care of clothing, food, and housing. Her gift showed she was very, very thankful and knew God could get her anything she needed. Their gifts showed they wanted praise from others. They also showed they were not really thankful for what they had.

Her example has caused many people to give more out of a heart of love and trust just like the little widow lady. In this way her gift has grown to many billions of dollars. That's how she gave more than all the rich people's gifts added together.

Jesus was so proud of her! He not only blessed her on that day but for the rest of her life. We do not know her name but her story has been told for over a thousand years. She has taught us how Jesus delights in unselfish giving till it hurts.

Jesus said to give with joy, thankfulness, trust, and love. He will make sure you always have enough to be able to eat and extra so you can give more.