Lessons in Grieving from Naomi 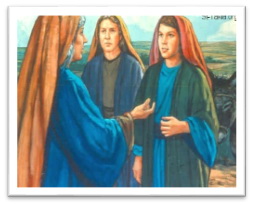 In the book of Ruth, we read the story of a woman named Naomi who, along with her husband and two sons, had left her home in Bethlehem to live in the country of Moab because Bethlehem was suffering a severe famine.  At some point during their time in Moab, her husband died, her sons married Moabite women and later they too died. So, Naomi found herself in a foreign country with no husband...

no sons and two foreign daughters-in-law.  Shortly thereafter, she heard that Bethlehem was free of the famine and she made the choice to return there. Ruth, one of her daughters-in-law, decided to return with her and so they made the arduous journey back to Naomi’s hometown, back to her people and culture, her religion, and her friends and relatives.

Let’s pick up the biblical narrative in Ruth 1:19-21(Message version) When they arrived in Bethlehem the whole town was soon buzzing: “Is this really our Naomi? And after all this time?” But she said, “Don’t call me Naomi; call me Bitter. The Strong One has dealt me a bitter blow. I left here full of life, and God has brought me back with nothing but the clothes on my back. Why would you call me Naomi? God certainly doesn’t. The Strong One ruined me.”
Many of you are most likely familiar with the legendary work by Elizabeth Kubler-Ross in which she writes of death and dying and outlines five basic steps in the grieving process. To be fair, these steps were never meant to be used as a checklist. Your grief is your own and unique to you, but research has shown that most grieving individuals will encounter each of these steps at some point before they reach acceptance and hope. Kubler-Ross’s steps are:  DENIAL,   ANGER,   BARGAINING,   DEPRESSION,   ACCEPTANCE.

Naomi’s loss was incalculable with the death of her husband and her two sons. She found herself bereft of all that was dear to her, living in a foreign country among people who worshiped a different god and whose customs were different. Sure, she had adapted in the more than 10 years she had lived there, but she knew that she would always be a foreigner and this only increased her sense of loss, loneliness and isolation. At some point in her grief after the death of her sons, she heard that rain had fallen on Bethlehem and food was again in abundance.  She began to reflect on her homeland, the town in which she had grown up, where she met and married her husband, birthed her two sons, the feasts and specials observances in the worship of the one true God, the women with whom she shared friendships, and the days of watching their children play and grow up together; a place where happiness had reigned. Just reflecting on all of this must have opened a tiny window of hope in her heart, enough to stiffen her resolve that no matter the inconvenience, the cost or hardship, she would return to Bethlehem, the only place where she would ever truly feel at home. 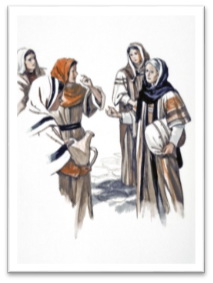 Naomi’s husband had been dead for several years at this point.  If she ever experienced moments where she couldn't believe that her sons were truly gone, she had only to look at her two solitary and barren daughter-in-law to dispel any fragments of denial. If I were to venture a guess, I would say that Naomi had moved from denial to anger and blame. When we look at the scripture reference above, we see a woman who has finally arrived back in the bosom of familiarity. She can, perhaps for the first time in months, maybe even years, let out her pent-up emotions and express her true feelings. “Don’t call me Naomi,” she chides her friends. “Call me Bitter (or as one version says, “Myra”).” She was angry with God and wasn’t fearful of stating so. Have you been there? Have you felt that it was God who took your happiness away, seemingly on a whim?


Like most people in the throes of grief and anger, she isn’t entirely honest about the situation. Look at her words, “I left here full of life.” While it’s true that her husband and two boys were alive, it is likely they would have starved had they stayed. It was a severe famine that prompted her husband to uproot them. He was a potter, a tradesman who had to purchase his grain from the local farmers. When the famine struck, his business died and the farmers had to take from their own stored resources to sustain life for themselves.  So he moved to Moab where he could build up a successful business and support his family. Of course, it’s easier to blame God than to blame the deceased loved one. But, aren’t you glad that Naomi felt secure and loved enough back in her hometown among her lifelong friends to vent her grief and anger? She was able to release those normal emotions and get them out in the open so that she could move on toward total healing.  In fact Dr. Alan D. Wolfelt in his book, Understanding Grief/Helping Yourself Heal, encourages you to talk about your grief. “Find caring friends and relatives who will listen without judging. Seek out those persons who will ‘walk with’ and not ‘in front of’ or ‘behind’ you,” he states. 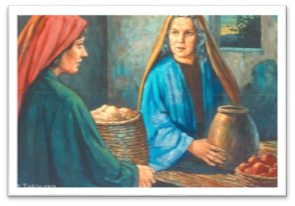 We do know that not long after this Naomi was already moving forward in her grief process because she began to think rationally about how to help her young daughter-in-law and teach her some of the finer nuances of their culture and religion.  In fact, I believe that it was through Ruth’s presence that Naomi was able to find a purpose for living again. Marta Felter, herself a widow, reminds other widows that in giving of yourself to a cause or an individual in need will help you find happiness and healing even in your time of grief. Certainly, some of Naomi’s motivation in helping Ruth was simply survival, but we can see from Scripture that Naomi’s heart was healing from anger and blame. When Ruth shared with her that she was gleaning wheat in the fields of Boaz, a relative of Naomi’s, Naomi exclaimed, “Why God hasn’t quite walked out on us after all. He still loves us in bad times as well as good!” A seed of hope was placed in Naomi’s heart and before long she saw that this was indeed a “God thing.” I don’t know, but again I surmise that there were days of dark depression for Naomi. After all, the deaths of three close loved ones are a lot to process and accept for anyone. Upon learning that Ruth had indeed landed in the field of Boaz, her faith in God’s ability to hear and answer prayer was renewed. Hope sprang anew in her heart.
Naomi’s grief story is tied up in the story of her daughter-in-law, Ruth. Even so, we can see how Naomi was able to move from abject despair to renewed hope and trust in God. It also gave her something beyond herself in which to become involved. Ruth, coming from another culture would not have been able to navigate the rules of courtship in that Jewish culture. Naomi lovingly taught her everything she needed to know to spare her the humiliation that would result from her ignorance. I can just imagine that Naomi is not just hopeful but filled with anticipation at how her “matchmaking” is going to play out. I think it was more than just wishful thinking though. She surely reasoned that if it was God who led Ruth to Boaz’s field, if it was God who had given Ruth favor with him resulting in his extra kind treatment of her, then it has to be God who is going to allow this relationship to culminate in the covenant of marriage.  And that is exactly what did happen. Grief stories, thankfully, most often come to a successful ending. God has so designed us that Weeping may endure for the night, but joy comes in the morning, Psalm 30: 5b. It isn’t his plan that we drown in our sorrow any more than it is his plan that we stuff our grief, fight our tears, and remain in emotional limbo for the rest of our lives. Naomi’s story is one of successful navigation through the hard and difficult steps of grief to recovery. We get glimpses of them through her words and actions in the book of Ruth. Just as you do, Naomi had choices to make, difficult choices many of them.

How did her life end? Well, again the book of Ruth tells us that after her firstBlessed be God! He didn’t leave you without family to carry on with your life. May this baby grow up to be famous in Israel,” Ruth 4:14. Famous indeed! Little Obed grew up to be the grandfather of King David and is in the lineage of our Savior, Christ Jesus! 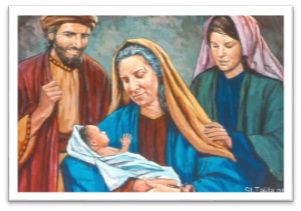 grandson was born to Ruth and Boaz, the town women said to her, “
Dear women, wherever you are on your journey through grief, remember that you are not, for even one moment, alone. God is right there with you, guiding your every step, holding your hand, calming your fears, and encouraging you at every turn. His Word is full of many promises to the widow. I came across the following written by the well-known pastor and author, Max Lucado. I’d like to leave you with his thoughts to ponder as you continue on your road to eternal recovery.

When you stand in the cemetery and stare down at the soft, freshly turned earth, and promise, “I’ll see you soon,” you speak the truth. Reunion is the splinter of an eternal moment away. There is no need for you to grieve like the rest of men who have no hope (I Thessalonians 4:13 NIV). So, go ahead, face your grief. Give yourself time. Permit yourself tears. God understands. He knows the sorrow of a grave. He buried his son. But he also knows the joy of resurrection. And by his power, you will too. 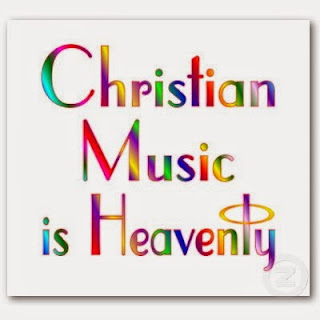 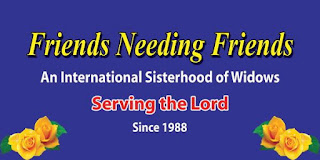 Father in Heaven, I'm sorry for the things I've done that are wrong: I am a sinner; forgive me. Thank you for living me and sending your Son, Jesus, to pay the penalty for my sin. Holy Spirit, come into my heart; Jesus be my Lord and Savior. I give You my life. Amen